Yakity-Sax is the eighteenth episode of season eight of My Little Pony Friendship is Magic and the one hundred and eighty-seventh overall. The title is a reference to the Boots Randolph song of a similar name, later recognized as the theme for The Benny Hill Show, which was parodied earlier in The Ticket Master and A Bird in the Hoof.

In this episode, Pinkie Pie picks up playing a bizarre instrument as a new hobby, but her friends get annoyed by her inability to play it.

This episode first aired as part of Discovery Family's "Summer Surprises" event on July 20, 2018, ahead of its officially scheduled airing on August 25, 2018.

According to supervising director Jim Miller, "zenithrash" was changed to "yovidaphone" because the original name was not approved by Hasbro's legal department.[3]

The episode begins with Fluttershy and Angel picking flowers together in the forest. All of a sudden, a loud, discordant noise scares all the birds away, and Fluttershy fears the sound is coming from a creature in trouble or pain. When she follows the sound to its source, however, she discovers Pinkie Pie playing a large, bagpipe-like instrument—and playing it so poorly that Angel plugs his ears with his own tail fluff.

Later, Pinkie continues to play her instrument poorly in Ponyville, causing anyone who hears to run away in cringing pain. Twilight Sparkle identifies the instrument as a "yovidaphone", a popular instrument from Yakyakistan that produces a pleasant sound when played well. Despite having little talent playing the yovidaphone, Pinkie greatly enjoys playing it, and her friends support her new hobby, believing she will improve her musical talent with enough time.

Applejack, Rarity, Fluttershy, and Rainbow Dash inform Twilight about Pinkie's poor yovidaphone playing and constant distractions. When Twilight tries finding a magic spell around this dilemma, Applejack insists they be honest with Pinkie, reminding Twilight of when she had to be honest with Princess Celestia about her acting ability.

As Pinkie drives more ponies away with her poor music, her friends approach her outside Sugarcube Corner. By this time, Pinkie Pie loves playing the yovidaphone so much, her friends cannot bring themselves to tell her the truth about her poor playing ability. After a bit of dodging the issue, the ponies eventually tell Pinkie that she's terrible at playing the yovidaphone and shouldn't waste her time with something she's bad at.

Pinkie appears visibly shaken by this news at first, but she accepts her friends' advice and agrees to stop playing the instrument, much to her friends' relief. However, as she watches a garbage collector pick up the discarded yovidaphone from her bedroom window that evening, Pinkie Pie is revealed to be completely heartbroken over her decision.

The next day, Twilight and Spike enter the Ponyville marketplace and find Pinkie Pie sulking. As a result of her decision to stop playing the yovidaphone, her coat has lost some of its color, and her mane and tail have gone flat. In an effort to cheer Pinkie up and make her forget what she's bad at, her friends decide to remind her of all the things she's good at.

Fluttershy organizes a tea party for Pinkie at the Sweet Feather Sanctuary, Applejack throws a party with party cannons at Sweet Apple Acres, Rainbow Dash bakes cupcakes with Pinkie at Sugarcube Corner, and Rarity styles her mane at Carousel Boutique. However, their efforts fail to lift Pinkie's spirits, and she remains permanently distressed, getting grayer and grayer by the minute. In a last-ditch effort, Twilight proposes a "Pinkie Pie Appreciation Day" to remind Pinkie of what she's the best at: being everyone's friend.

The rest of the Mane Six organize a big party in Pinkie Pie's honor in the town square and expect Gummy to bring her. When Gummy arrives to the party without Pinkie, the ponies decide to get her themselves. However, when Twilight teleports them into Pinkie's bedroom, they discovery that all of her belongings are gone, having been packed up by her sister Maud. Maud explains that Pinkie asked her to pack up her things and bring them to the Pie family rock farm because she's decided to move away to Yakyakistan and appreciate yovidaphone music by those who can actually play the instrument.

Unable to accept Pinkie's sudden decision to leave, Twilight and the others resolve to go to Yakyakistan and convince her to come back home.

Upon arriving in Yakyakistan, the ponies follow the sound of beautiful yovidaphone playing to a yak hut, where a yak named Yigrid is playing music on a stage and Pinkie Pie is drowning her sorrows in ice cream sundaes. When her friends approach and try to get her to return home, Pinkie quickly agrees to do so. Unfortunately, her sour mood doesn't change because hearing good yovidaphone music makes her feel miserable about her lack of talent.

As Yigrid takes a break from playing and asks Pinkie to watch her yovidaphone for her, Pinkie looks slightly happy casually playing a few notes, but she quickly stops before her friends get upset. Twilight and the others realize they were wrong to make Pinkie stop doing something she enjoys so much, and they encourage her to continue playing the yovidaphone as long as it makes her happy. Pinkie Pie is nervous about playing poorly in front of a crowd of yaks, but her friends urge her to play nonetheless.

With her friends' support, Pinkie takes the stage and starts playing the yovidaphone just as poorly as always, and the color in her coat and mane returns. When she finishes playing, the yaks unexpectedly cheer and applaud. Yigrid returns from her break and tells Pinkie that as long as playing the yovidaphone makes her happy, any amount of playing—no matter how bad it sounds—is perfect. Overjoyed, Pinkie keeps playing music for her friends and audience.

Pinkie Pie: And that's with only a few days of practice! Can you believe it?!
[honk!]
Rarity: Yes. Yes, I can.
Applejack: I can honestly say I've never heard anything like it in my life.

Applejack: Anypony else think that sounded like an apple core cut up in a pulp grinder?
Rarity: Apple-solutely! Uh, absolutely.

Twilight Sparkle: [sighs] You're absolutely right, Spike. Sometimes it is nice to get out of the library and be in the sun.
Spike: Especially when you take the library with you.

Twilight Sparkle: Maybe we can just pretend she's really good, and then I'll find a spell that will—
Applejack: Oh, no, no, no! We're not goin' through that again! Remember how well it worked out when you weren't honest with Celestia about her actin' ability?

Twilight Sparkle: Pinkie, we all support you, but we're afraid you're just not good at the yovidaphone, and none of us want you to waste your time on something you can't do well.
Pinkie Pie: Oh. [upbeat] Why didn't you just say so?

Pinkie Pie: [sadly] No more yovidaphone playing for me.

Applejack: Uh, Gummy? You were supposed to bring Pinkie Pie. What happened?
Gummy: [blinks slowly]
Rarity: Is she still coming?
[beat]
Twilight Sparkle: Fluttershy, can you understand what he's saying?
Fluttershy: I could... if he was talking.

Rainbow Dash: We respect your decision to move to Yakyakistan.
Twilight Sparkle: But we just wanted to remind you how much you mean to us, and how much we'd miss you if you decided to move here for—
Pinkie Pie: [despondent] Fine. I'll move back to Ponyville.
Rainbow Dash: Wow. That was a lot easier than I thought. We're awesome!

Rainbow Dash: Pinkie Pie, you get up on that stage and play. If these yaks don't like it, they'll have to answer to us!

Pinkie Pie: Lemme play you the song I just wrote two seconds ago! It's called "I've Got the Best Most Supportive Friends a Pony Could Ever Ask For"! [aside] It's a working title. 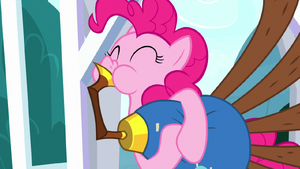