Zephyr Breeze appears in the season six episode Flutter Brutter, introduced as Fluttershy's younger brother. He is depicted as a chronic slacker who freeloads off of his parents after dropping out of mane therapy school.

When first introduced, Zephyr is stated to have pursued various interests before quickly giving up on them, including mane therapy and sculpting. Unable to support himself, he frequently moves in and out of his parents' home in Cloudsdale, much to the frustration of his older sister. He is also heavily infatuated with Rainbow Dash, constantly flirting with her under the narcissistic belief that she is obsessed with him.

When Zephyr moves back in with his parents, his presence serves as a nuisance and burden to their way of life. He moves their knickknacks out of the way to make room for his own, and he re-purposes his father's cloud collection storage house as his art studio/meditation garden. When Fluttershy confronts him about this, her parents take her side, and Zephyr tearfully takes his leave—only to move in with Fluttershy soon afterward.

Though his presence in her cottage is just as cumbersome as before, Fluttershy allows Zephyr to stay on the condition that he get a job. However, his attempts at being employed usually involve him slacking off and getting others to do the work for him or otherwise quitting without even trying. As a result, Fluttershy kicks him out of her cottage, and he goes to live by himself in the Everfree Forest.

Incapable of living on his own, Zephyr eventually confesses to his sister that his unwillingness to try stems from a crippling fear of failure. Fluttershy convinces him that sometimes one has to do things, even if one might fail. With the support of Fluttershy and Rainbow Dash, Zephyr pursues mane therapy once again and graduates from mane therapy school.

In season nine, Zephyr appears as a member of the Canterlot Royal Guard in Twilight's Seven. He is seen guarding one of the bricked-up secret passages into the castle. Rarity has Rainbow distract him while she removes the bricks. Zephyr is later fired for leaving his post unguarded, and it is revealed that he was specifically hired by Princess Luna as part of Spike's plan.

In The Ending of the End - Part 2, Zephyr Breeze appears taking shelter with his parents and other Pegasi in Cloudsdale as the city closes itself off from the other pony races. In The Last Problem, Zephyr attends Twilight Sparkle's coronation ceremony. He also briefly appears in Fluttershy's group shot during The Magic of Friendship Grows.

Zephyr Breeze appears with his family on page 24 of the My Little Pony Holiday Special 2017 comic. In My Little Pony: Friendship is Magic Issue #70, he appears on page 16. In Issue #73, he tries to take care of Fluttershy's animals in her absence but with little success. In Issue #74, Zephyr Breeze has a job at the Mane Event salon in Ponyville, and when he continues to suffer from self-esteem problems, he attends the All-Equestria Mane Styling Conference and meets fellow stylist Pixie Cut. On page 2, he refers to Fluttershy as his "baby sister" and "little sis", contradicting his statement in the show that she is his older sister.

Zephyr Breeze appears in a photograph in Land of Harmony, and in The Magic of Friendship.

Zephyr Breeze appears in episode 2 of Rarity's Peek Behind the Boutique, "Fashion vs. Function".

Zephyr Breeze is a character in Gameloft's mobile game. The game's description of him states, "Though formerly lazy, this pony’s no slouch... But is there a chance he could crash on your couch?"

"Guess who's home! That's right, big sis, it's your one and only favorite little brother, moi."
— Flutter Brutter

"Sorry, sis, but when something's not the right fit, this pony's gotta fly!"
— Flutter Brutter

"I hate to deprive you of my presence, but this breeze needs his Z's."
— Flutter Brutter

"Cracking the whip, huh? You always were kind of bossy."
— Flutter Brutter

"You don't have to come up with some excuse to hang out with me, Rainbows! Let's just go for a fly and see where the day takes us."
— Flutter Brutter

"I can already feel the electricity between us."
— To Rainbow Dash, Flutter Brutter

"What if I give everything I have and still fail? Honestly, I think it's better not to try at all."
— Flutter Brutter

"It was only a matter of time before they recognized my true genius! But actually doing the work probably helped."
— Flutter Brutter

"The truth is such a gift. Like, I had to follow my bliss to see guarding is my calling. Like, look at me go. I'm gonna walk over here, and I go whoo! Over there! And I go, "Yeah!" and sometimes, I just stand like this and look real cool, and I go down the hallway and go, "Unh, unh, unh, unh, unh!"
— Sparkle's Seven

"To be fair, it was never made specifically clear to me what "guarding" actually means, so this is on you."
— To royal guard, Sparkle's Seven

"Just because I've never held a job longer than one day doesn't make me a quitter... It makes me a sampler! I'm building up a portfolio! To be perfectly honest, it's quite a lot of work, and I wish more ponies understood how hard it is..."
— Enterplay collectible card game Defenders of Equestria expansion set card #56 SR of Zephyr Breeze

"My parents are the best friends I could ask for!! Mom gives me all the space I need!!"
— My Little Pony Facebook post[7] 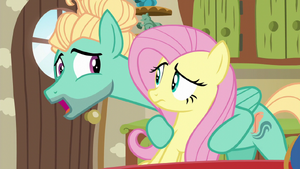