Zephyr Breeze's human counterpart appears in the My Little Pony Equestria Girls franchise. He is a student at Canterlot High School.

Zephyr Breeze appears in the Better Together short Overpowered, asking Rainbow Dash out on a date before being snubbed. In the Rainbow Dash ending of the Choose Your Own Ending short Best Trends Forever, he appears wearing a rainbow wig after Rarity makes Rainbow Dash a fashion trend. In the beach short Aww... Baby Turtles, Zephyr appears standing knee-deep in the water with Lyra Heartstrings. In Blue Crushed, he tries to impress Rainbow Dash with his surfing skills and fails when he reveals he does not know how to surf.

In the second season short Schedule Swap, Zephyr briefly appears in woodshop class during Rarity's school schedule mix-up, and he shows off a flute he made. In I'm on a Yacht, he attends a pool party on the Luxe Deluxe cruise ship. In the Choose Your Own Ending short Lost and Pound, he appears at the Starswirled Music Festival.

In Forgotten Friendship, Zephyr makes a brief cameo hanging out with Snips and Snails outside Canterlot High School.

In Sunset's Backstage Pass, Zephyr Breeze appears in the beginning just as the Equestria Girls arrive at the Starswirled Music Festival talking to "Aqua Blossom", in the festival ticket line, and in the audience at PostCrush's concert.

In the "Dashing Through the Mall" short of the holiday special, Zephyr Breeze appears as a salesperson at "Trend of the Line" at the Canterlot Mall. He helps Rainbow Dash pick out a last-minute gift for Fluttershy—an instant camera—though it later turns out that Zephyr got Fluttershy the same gift the previous year.

In the "You Choose the Ending!" novelization of Sunset's Backstage Pass, My Little Pony: Equestria Girls: Make Your Own Magic: Starswirl Do-Over, Zephyr Breeze appears on page 3.

"Hey, Rainbows! There you are. Do you wanna go to the mall with me?"
— Overpowered

"Who's ready for a lesson in the fine art of the crush?"
— Blue Crushed

"Rainbow Dash, if you could find the strength to forgive me and the courage to keep from hopelessly falling for my—"
— Blue Crushed 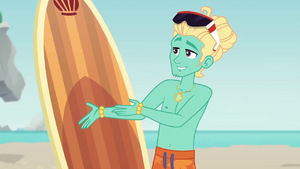