For the similarly-named character in My Little Pony: Pony Life, see List of ponies/Earth ponies/Mares#Zesty.

Zesty Gourmand, called the "Queen of Cuisine" by Rarity, is mentioned before she is seen. Canterlot society holds her three-hoof rating system—whereby she judges a restaurant for its cuisine, decor, and presentation—in such high esteem that Rarity and later other ponies refuse to give their patronage to any unrated establishment. Pinkie Pie starts to question Zesty Gourmand's authority when she discovers that that all of the restaurants which have received scores of three from her are virtually identical, right down to serving the same (very bland) food.

When the restaurant seems to be succeeding in spite of her unpleasant evaluation, Zesty Gourmand appears once more at the scene to rebuke the citizens of Canterlot for ignoring her judgment. The following suggestion that she cannot dictate the behavior of these ponies offends the critic. Rarity then advises her that not trying the food of a now-popular restaurant could affect her reputation. After a brief pause, she harrumphs and storms outside.

Zesty Gourmand is a character in Gameloft's mobile game, and serves as a boss during "The Pinkie Parents Problem" event. She is also mentioned by Trenderhoof during the "Freedom of the Press" event, and has a story role during the "Royal Dining: Entrée" event as a judge in the Equestrian Super Chef Competition. The game's description of her states, "Zesty is known as the Queen of Cuisine -- but her food critic’s judgment still seems a bit mean." 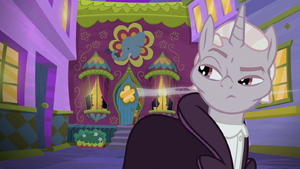