Zipporwhill is a Pegasus filly who first appears in the season four episode Filli Vanilli. She has a light yellow coat, an amber mane and tail, light green eyes, and a cutie mark of three paw prints.

In the season seven episode Forever Filly, Zipporwhill gets help from the Cutie Mark Crusaders to reconnect with her pet dog Ripley, having received her cutie mark on the same day she adopted him. With Sweetie Belle's help, Zipporwhill comes to terms with the fact that the puppy she adopted is now a full-grown dog.

In the season nine episode The Last Crusade, Zipporwhill and Ripley are in attendance at the CMC Appreciation Day ceremony.

In the season's final episode The Last Problem, Zipporwhill briefly appears in Rarity's group shot during The Magic of Friendship Grows.

Zipporwhill appears in Ponyville Mysteries: The Tail of the Timberwolf having a birthday party that gets crashed by a candy-eating timberwolf.

Zipporwhill is a playable character in Gameloft's mobile game, added in the game's Everfree Forest update. In the game, Zipporwhill is an Earth pony instead of a Pegasus, and her in-game description states, "Zipporwhill is a little pony with a huge personality. She is also the biggest fan of the Pony Tones quartet!" A promotional image for the game depicts her as a Pegasus.

ZIPPORWHILL is such a fan of the Pony Tones that she got them to play at her cute-ceanera. She's also a huge fan of puppies and kitties, but then again, who isn't?

Zipporwhill appears on the season 4 poster.

In the High Magic expansion set of Enterplay's collectible card game, card #83 R of Zipporwhill features the quote "Omigosh what a cute puppy! Did you know I memorized all the dog breeds in the encyclopedia?! There's terriers and sheepdogs and mastiffs and bullmastiffs and bulldogs and... Hey, where're you going?" In the Marks in Time expansion set, card #58 R of Zipporwhill features the quote "Puppies! Kitties! Bunnies! Yesyesyesyesyes!"

"My new puppy and I thought it was super-duper crazy good!"
— Filli Vanilli

"It's my puppy, Ripley. We used to be so close. In fact, I got my cutie mark the day I found him and took him home. But now, it's like he wants nothing to do with me."
— Forever Filly

"This isn't who I am! My cutie mark must be for something else, because my puppy just doesn't love me anymore!"
— Forever Filly

"Welcome to my party! Have fun, okay? Don't forget to get your face painted!"
— Ponyville Mysteries: The Tail of the Timberwolf

"Omigosh what a cute puppy! Did you know I memorized all the dog breeds in the encyclopedia?! There's terriers and sheepdogs and mastiffs and bullmastiffs and bulldogs and... 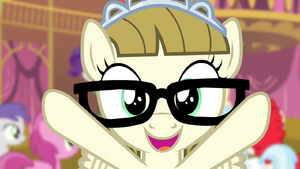