Zoe Saldana is an American actress and dancer. She provides the voice of Captain Celaeno in the feature film My Little Pony The Movie.

Saldana's involvement in the film was first announced by Variety in January 2017;[1] Saldana later confirmed her role in the movie on Facebook in February.[2]

Outside My Little Pony, Saldana is best known for her portrayals of Nyota Uhura in Star Trek, Neytiri in Avatar, and Gamora in the Marvel Cinematic Universe starting with Guardians of the Galaxy. In other television, Saldana made her professional debut in a 1999 episode of Law & Order, and she has starred in Law & Order: Special Victims Unit, Six Degrees, and the miniseries Rosemary's Baby as the title character.

In other film, Saldana's first role was in Center Stage, and she has starred in Drumline, Crossroads, and Pirates of the Caribbean: The Curse of the Black Pearl before her breakout roles in Star Trek and Avatar. She starred in Colombiana in 2011, and she reprised her roles as Uhura in Star Trek Into Darkness and Star Trek Beyond, and as Gamora in Guardians of the Galaxy Vol. 2, Avengers: Infinity War, and Avengers: Endgame. In 2016, she starred in the Ben Affleck crime drama Live by Night.

In animation, Saldana lent her voice to the character Maria Posada in the 2014 film The Book of Life and Adelina Fortnight in the 2019 film Missing Link.

Saldana is also an avid performer of theater and dance. She began performing with the Brooklyn-based theater group "Faces" in 1995, and her acting experience and dance training helped her land her first film role in Center Stage. 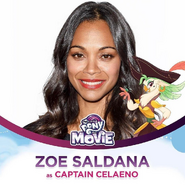 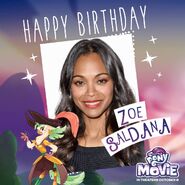